Showing posts from December, 2011
Show all

December 19, 2011
Sunday We had a celebration of life for our grandson Lucas, who lost his battle on Monday. It was at the hospital where he stayed for five months, and was attended by maybe 130 people - co-workers of Ben's at the Air Force, in a long line of dress blue uniforms, and dozens of nurses, doctors, desk people from the NICU and from the prenatal ward where Heather was for a month before Lucas came. It was a tender and beautiful service - Our thanks to all the staff and the wonderful chaplains at Providence.
Post a Comment
Read more

December 14, 2011
Our grandson was lucky to have Ben and Heather for parents, and we are all lucky to have known him. His life was a struggle, and he fought valiantly and ferociously. hugs to all those who prayed for him, care about him, or helped him fight. Benjamin Dean Lucas Eric Dean, born july 2 2011, died today December 12 2011 at 11:15. Lucas was a verry tough babie. He fought hard to hold on to life for a verry long time against impossible odds until the verry last moment. When it became aparrent that his condition was no longer repairable and his suffering became too much, a decision was made to let him pass. He was loved and will be missed by both of his parents Ben and Heather, his entire family, everyone who saw his photos or heard his story, and the entire Providence NICU/prenatal unit staff.
Post a Comment
Read more

December 07, 2011
Made ten more blocks yesterday - seemed to be pressing for hours. There will be pictures when it's done - or maybe when the top is done. day & night in teals with rust accent http://www.quiltinaday.com/shoponline/books_display.asp?i=20490
Post a Comment
Read more

I read a lot of blogs 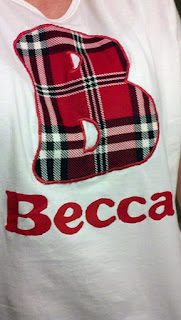 Over the weekend, my daughter cut out and she and I sewed ten (10!) pair of pajama pants - didn't get all the elastic done - but 5 pair are complete. She added a ruffle to the bottoms of 2 of the girls' pairs. She also embellished matching tees with  satin stitch, painting, and iron-on letters and flames!! The plaid is really a very soft corduroy that was on sale at Wal-Mart.  Other jams were made from flannel, cotton sheeting, and blue-flame quilting cotton.
Post a Comment
Read more
More posts